This page only applies to playback of module files (XM, MO3, IT, S3M, MTM, MOD and UMX). 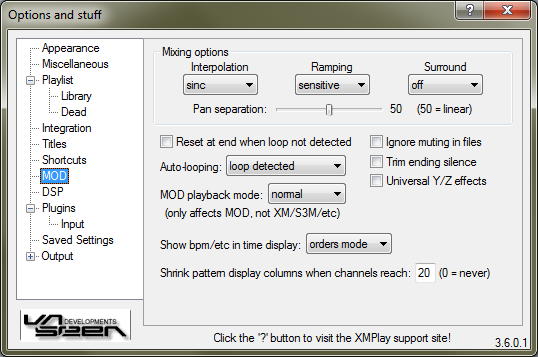 If XMPlay plays a sample, it can Interpolate it using a linear or sinc algorithm, or use no interpolation. The sinc method sounds smoother, but requires more CPU power. Some samples will produce clicks when large volume or panning changes are applied, but the Ramping setting will introduce a short fade-in to prevent that when set to normal. When set to sensitive, the ramping is only applied it the sample would otherwise produce a click, while it remains off for others samples, like percussion. The Surround setting at mode1 emulates a surround setup of the module, and mode2 does the same while ignoring panning of samples. The Pan separation (distance between left and right) for modules can be adjusted using the slider.

If you're looping a modules which is not intended to be looped, some settings (like channel volume) may be off. XMPlay can Reset these at the end of the file when a looppoint is not detected. If you've set track looping to auto (at the Miscellaneous page), this determines how modules should be looped: never, when a loop point is detected, or only if the detected loop point is not the start of the file. Since not all trackers played MODs the same way, you can choose how XMPlay should play them with the MOD playback mode. It can be set to normal, FT2 (FastTracker 2), PT1 (ProTracker for Amiga) and PT1 -filter (Protracker without Amiga filter). XMPlay can show additional information when playing modules, like beats-per-minute, speed and channel usage. With Show bpm/etc in time display you can choose what to show in the title area of the Main Window: nothing additional (never), only the order display (orders mode, as an alternative to elapsed/remaining time), or everything (always). If you're using the MOD Pattern Display visualization, the number of channels may exceed you screen width, so you can Shrink the pattern display columns when channel count reaches when it grows too large. When shrinking, XMPlay will remove the volume/instrument column from view. Ticking Ignore muting in files will make XMPlay ignore channel muting in IT or S3M files. Trim ending silence will remove the silence at the end of the track, and instead XMPlay will continue playing the next track. Universal Y/Z effects enables Yxx and Zxx IT effects in XM and S3M files, as used in MPT (ModPlug Tracker).